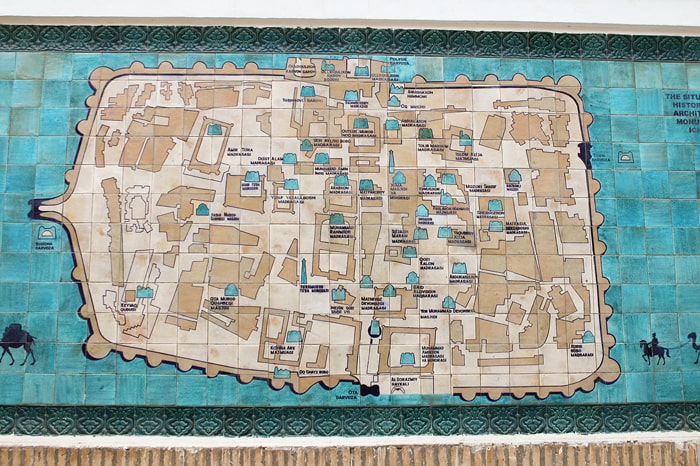 Day 1: Tashkent
The whole day will be devoted to discovering tour of Tashkent, capital city of Uzbekistan. The first will be the central square of the city - Independent Square. It was built for the honor of the victory over fascism during World War II. Then you will walk on the main Broadway, which leads to the Square of Amir Timur. Later you will have a chance to travel on the Tashkent subway, which is one of the beautiful metros in the world. It has been working since 1977. Next remarkable sites of old part of the city are Chorsu Bazaar, Kukaldash Madrasah and Hast Imam complex, which includes many madrasahs, mosques and mausoleum. The most important sightseeing of the day is Othman Quran, the oldest copy of the holy Quran in the world, dating back to 8th century. The owner of the book was Othman Ibn Affan, one of the four Caliphs succeeded prophed Muhammad. Nowaday , you can see blood stains spread on the sheets of the book, it happened when he was murdered by his enemy during 8th century. Night in a hotel.

Day 2: Tashkent - Termez (morning flight)
You will take a morning flight to Termez, which is one of the ancient cities in Uzbekistan and all over in Central Asia, whose roots are going to back to 1st century BC.  According to the ruins found in the modern territory of the city, during its existence, it witnessed many civilizations and different states about which you will learn during your travel. In the 13th century, the history of the city from its establishment was totally disappeared after Genghis-Khan's invasion.  Later it was founded new city of Termez to the east of old town. The city tour will show you Archeological museum, Fayaztepa, Mausoleum of Hakim at Termezi, Buddhist Stupa Zurmala, Mausoleum Sultan Saodat, Honako Kokaldor Ota and Nunnery Kirk Kiz. After Jarkurgan's Minaret, you will visit Dalverzintepa archeological dig (sometimes because of the military trainings, some sights can be closed). After tight excursion, check in to hotel and have a rest.

Day 3: Termez - Shahrisabs - Samarkand (390 km, 7 hours)
In the morning, we will continue to another historically important town - Shahrisabs, famous in Uzbekistan. It was the motherland of great ruler Amir Timur. Today will be amazing city tour of Shahrisabs during your travel. The first site will be definitely Ak Saray Palace; no other sites can compete with its beauty and majesty. Amir Timur constructed this magnificent building.  On its the main front, it was written: "If you would like to know about our power, look at pun buildings". Further, you will visit the Mausoleum of Jahongir. Jahongir was the eldest son of Amir Timur and died in the fight at the age of twenty. His death touched Amir Timur deeply, even some said that his grief lasted for next 30 years. The concluding site will be memorial complexes of Dorus Siadat and Dorus Tillavat. These are the burial mounds of all relatives and generation of great ruler. Go on driving to Samarkand. Overnight in a hotel.

Day 4: Samarkand
Mysterious city Samarkand lies in the Zerafshan river valley. Samarkand is the second biggest city of Uzbekistan after Tashkent and considered to be as old as Babylon and Rome that tarvelers enjoy much. The sightseeing tour will include Registan square, it has calm atmosphere, when you get to the square, and three amazing madrasah buildings make you to admire the beauty forever. This architectural masterpiece's history goes back to 15th-17th century. Next will be Shakhi-Zindeh, Guri Emir Mausoleum and Mosque Bibi Khanum.  Complex Shakhi-Zindeh is one of the Heritages of UNESCO, it was constructed during the 11th-15th century. Bibi Khanum Mosque is Tamerlane's wife mosque. He built it after his victorious battle in India. Stay in a hotel.

Day 5: Samarkand - Tashkent (train)
After breakfast at the hotel, carry on your Samarkand adventurous tours. The first site will be Observatory of Ulughbek. Ulughbek was outstanding leader and scientists in Samarkand. He was the one who categorized celestial bodies.  In his catalogue named "Zidji Guragoni" he wrote about 1018 celestial bodies. He lived during 15th century and unfortunately, his own son arranged his death.  Afternoon, you will enjoy travelling by walking on the main street full of teahouses, sweets and workshops, souvenir shops. Later you can visit National Bazaar "Siab", fast moving and colorful local bazaar offers traditional crafts and handmade sweets. Next exciting excursion will be to handmade carpet factory. This factory employs more than 400 women and all of them making carpets without using traditional methods of making. Another interesting manufacturer of the city is paper workshop. It is one of the unique places, where the famous silk-paper is produced. After interesting excursion, take a train to Tashkent to complete your tour in Uzbekistan. Overnight in a hotel.

Day 6: Tashkent - Flight
Transfer to the airport according to the flight schedule.