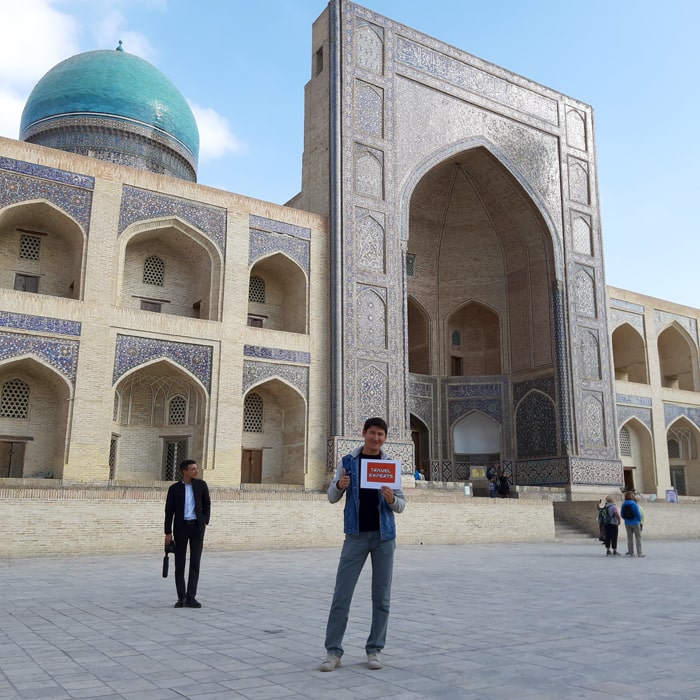 Day 1: Tashkent
Today you will explore Tashkent during your city tour, including with its historical monuments and modern part of the city. The first, you will travel to Independent Square, which was constructed for the honor of the victory over fascist Germany during the Second World War. Then you will take a short walk to Amir Timur Square via the beautiful local Broadway. Further, there is a chance to take a ride on Tashkent subway. City metro considered to be one of the most beautiful subways in the world and it started first line in 1977.  Next wonderful places of old part are Chorsu Bazaar, Kukaldash Madrasah and Hast Imam complex, including many madrasahs, mosques and mausoleum. The most important treasure of this complex is Othman Quran, the oldest copy of the holy Quran dating back to 8th century. The holy book was owned by Othman Ibn Affan. He was one of the four Caliphs who succeeded prophed Muhammad. Nowaday, you can see blood stains spread on the sheets of the book, famous all over in Uzbekistan. He was assassinated by his enemies in 8th century. Night in a hotel.

Day 2: Tashkent - Nukus (morning flight)
You will take morning flight to Nukus. After arrival, interesting city tour wills awaits you to continue your travelling: Museum of Savitsky, where the prohibited works of art are shown. This museum hosts 20th century masterpieces of avant-garde paintings like group of Sokolov, Komarovskiy and Amaravella. The coordinator of the Karakalpakstan state museum gathered the museum exhibition during 1960s, the only one in Uzbekistan. He bought some of the banned works from soviet artists; some just gave them free. During the banned period, he perfectly save them in Central Asian art house in remote area. After excursion in extraordinary art-house, you will drive to Mizdakhan necropolis in the countryside. According to the archeological researches, it was a city during 4th century BC and 14th century AD. Night in a hotel.

Day 3: Nukus - Kungrat - Sudochye - Aral Sea (420 km, 9 hours)
In early morning, start for a long way to a tour to famous Aral Sea of Central Asia t continue your travelling. The way will take nine hours, during that time; you will drive through Kungrad - Plato Ustyurt - Sudochye Lake. En route, have a break at Gaur-Kala Fortress, which "fortress of the infidels". Still can be seen some remains of originally 10-meter high defensive walls of fortress, which was built in 4th century BC. Nowadays it hard to say, how was it in the beginning. You will arrive to Aral Sea at dusk and the camp will be ready while you are exploring the site. Have an open-air dinner and sleep at tent Uzbekistan.

Day 4: Aral Sea - Muinak - Nukus (440 km, 9 hours)
Early in the morning, you can capture the amazing moments during your tour. You will carry on your journey to picturesque canyons of Ustyurt. Later, you will drive to Muinak, within the dried bottom of the sea. This ecological change deeply influence on the life-populated area here. One of the clear examples is Muinak town. Earlier it was the biggest port and fishery center of Karakalpakstan that travelers enjoy a lot. There you will see the remains of the ships at the old shore of the Sea and you will also visit town museum. Further, return to Nukus, one of the famous cities in Uzbekistan. Night in hotel.

Day 5: Nukus - Ayaz Qala - Tuprak Qala - Khiva (290 km, 6 hours)
Today you will carry on with travelling to the oldest Uzbek city Khiva. The offers exceptional beautiful sites of the history. The history of Khiva closely related with the Khorezmshah's State, whose capital was Urgench near Khiva. Compare to other cities in Uzbekistan, Khiva was the most developed town along the Great Silk Road which you will learn during your tours. According to the 10th century resources, almost all traders from East to West stopped over Khiva. Every time city opened, its doors to the long string of caravans and host them in his warm and safe environment. On the way, you will visit remains of ancient civilization: Ayaz Qala and Turpak Qala. Ayaz Qala served as a fortress during Khorezm State, was built in II century AD. According to old folklore, it was named for the honor of brave slave warrior Ayaz. Another fortress Tuprak Qala was established in I or II century AD and was kept until 6th century. The name Tuprak means clay fort, in ancient time Khorezmian leader Artav used it as a palace.  Long lasting conquering and wars over centuries destroyed the forts. Arrive to Khiva and stay in a hotel.

Day 6: Khiva - Urgench - Tashkent (flight)
Today's city tour will take you to ancient times of the history. You will start from inner part of the city-Ichan-Qala. Thick walls protect this most remarkable part of the city in the middle of the town. Ichan -Qala boasts with more than 400 traditional houses and over 60 masterpieces of architecture. Ancient sound buildings, palaces, mosques, madrasahs, mausoleums, minarets, caravanserais, bathhouses make Ichan -Qala unusual city museum. The most wonderful monuments of Ichan -Qala is Kunya -Ark fort, Muhammad Arang Khan constructed it in 17th century.  Others are minaret Kalta Minor and palace Tash Khouvli, glorious examples of old Khorezm architectural art of 1830s. End of travel in Uzbekistan.  Night in a hotel.

Day 7: Tashkent - Flight
After breakfast, transfer to airport according to flight schedule.