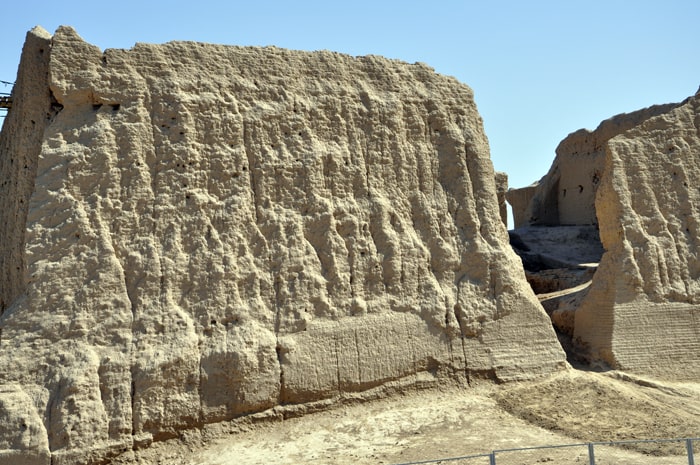 Day 1: Ashgabat
After arrival, your guide will meet you at the airport and accompany to Ashgabat. You will explore Nissa Fort, which is 12 km from the city. It is one of the heritage of UNESCO since 2007 and was an ancient capital of Parthia during III century BC. Later Old Nissa was an imperial palace. Then during your tour you will travel to the famous Ertugrul Gazi Mosque, which is the sister of the popular Blue Mosque in Istanbul with its four white minarets at the corners. Another fascinating Mosque is Azadi Mosque. It is pure masterpiece of old Islamic and Byzantine style and stands out with its majesty and beauty. Further, visit *Gypjak, Ruhy mosque, the name means "the mosque of spirit of Turkmenbashi"  and located in the native village of Turkmenbashi. The construction of the mosque is one-domed with four minarets and the size was chosen for the honor of independence year of Turkmenistan 1991- the height of minaret 91m. It is available to visit through nine arches. Night in a hotel.

Day 2: Ashgabat - Turkmenabad
Today we will travel to Turkmenabad, on the way during your tours visiting many places of interest. First site is Seyit Jemaletdin mosque, dating back to XV century. In the result of Ashgabat earthquake, the mosque was destroyed, but later it was perfectly reconstructed. Today, on the front of the building you can see the writing telling that this monument was erected under Abul-Kasim Babur, Temurid prince who lead Khorasan during 1447- 1457. Moreover, there are fantastic dragon images on decorating facade arch. En route, you will visit Abiverd fortress. It is historically significant heritage on the same level with other eight reserves of the country: Kunya-Urgench, Nissa, Merv, Dakhistan. The fort has important role for people in order to protect. It had only one door from south side. Moreover, there were a mosque of early 15th century near the central square of the fort, popular in Turkmenistan. Later visit Mevr, the first city implemented irrigation system in Central Asia, which was the main reason why Mevr became the largest city of ancient time. It is often said that the Mevr is "a soul of a king, a mother of Khurasan cities, and, the city that helds the Universe". The great Turkic philosophers like Omar Khayyam, As - Samani, Imamaddin-Isphakhani lived here. Arrive to Turkmenabad and stay in a hotel.

Day 3: Turkmenabad - Astana-baba - Kerki village - Turkmenabad
After breakfast start travelling for Biospheric Reserve of Repetek, where you will visit museum. Then, you can explore some part of memorial complex:  mausoleum of Astana and tomb. Here you can come across to different epochs' buildings located very close to each other, but it will be challenging to know the initial style of the building. Mausoleum Astana-baba is dating back to 11th-12th century and the popular place for worshipers, there is also holy men accepting people come to pray. However, there no information who was Astana-baba famous in Turkmenistan, but many believe in its sacred and healing power. Annually thousand of worshippers come and wait for a long queue to believe in healing from illness about which you will learn during your tours. Night in a hotel.

Day 4: Turkmenabad - Mary - Merv
In the morning drive to Mevr, which 40km from Mary to make an unforgettable tour.  It is the first area where the watering system was introduced and lead to the development of the surrounding. For instance, the Mevr, Margush, Margiana and Mary were the fruits of this development. The first written chronicles from Avestian known to travelers, where the Mevr was mentioned dated back to 8th -6th centuries BC. According to these sources, the city was "a soul of a king, a mother of Khurasan cities, and, the city that helds the Universe" in Turkmenistan. World's famous thinkers like Omar Khayyam, As - Samani, Imamaddin-Isphakhani lived in Mevr. Here you will also visit Soltan Sanjar mausoleum, Erk gala, Gawur gala, Soltan gala, Kichi and Uly Gyz gala and many other sites. Overnight in a hotel.

Day 5: Mary - Ashgabat - Darwaza
Morning transfer to Ashgabat. Then carry on to Darwaza Gas Crater for a tour, which is known as ‘The Gates of Hell". Its eternal flames can be seen in long distance. The history of the Gates of Hell goes back to 1971, when the soviet authorities accidentally punched the earth, which collapsed into the underground, where there natural gas. Later having punctured a pocket of gas, poisonous fumes began leaking at an alarming rate. Despite this fact and frightening name, luckily many people continue to trek to Darwaza as an extraordinary destination for exploring druing your travel. Government also take some measures to make it popular among travelers. In addition to crater, the desert around it also becoming high spot with wild camels and sand dunes in Turkmenistan. Night in a tent.

Day 6: Darwaza - Ashgabat
In the morning, return to Ashgabat. En route, visit water and mud crater. Another stop at Yerbent village. In the evening, carry on a city tour in Ashgabat. End of your tour in Turkmenistan.

Day 7: Flight
After having breakfast, transfer to airport according to the flight schedule.

Note: Every traveler must have 2 photos (5×6) to present at the points of entry.