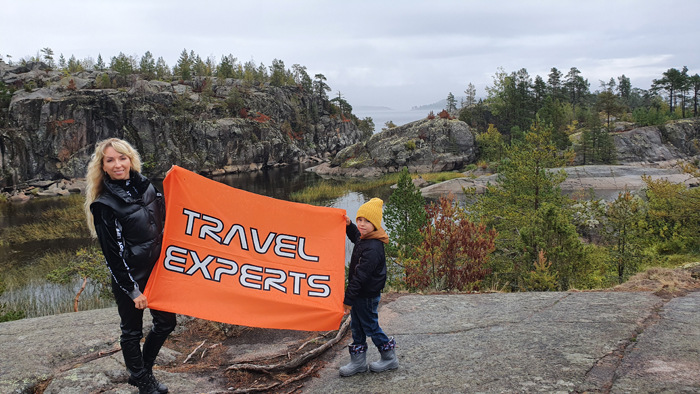 Day 1: St. Petersburg city tour
Your driver will meet you at Pulkovo International Airport and take you to the capital, St. Petersburg. Your first day in Russia will be dedicated fully to a city tour. You'll go to Ostrovsky Square, Vladimirsky Avenue, Vosstaniya Square, and other places. Then you'll travel down Mikhailovskaya and Bolshaya Konyushennaya streets, passing by Palace Square, the Church of the Savior on Spilled Blood, the Summer Garden, and Troitskaya Square. You'll spend the night in a hotel.

Day 2: St. Petersburg - Kiryavalahti
Today you will visit an amazing village - Kiryavalahti. This wonderful region is recognized for the grandeur of northern environment, as well as a plethora of legends concerning Sortavala's "Finnish age." You will witness a stone castle in the town of Priozersk on the island of the Vuoksa River, as well as the valley of waterfalls and gorgeous animals. Then you'll head to Kirch Lumivaar. This is an ancient Finnish church. You'll spend the night in a hotel.

Day 3: Kiryavalahti - Petrozavodsk
You will have a boat ride along of the Ladoga Skerries in the morning. Then you'll go to the majestic mountain park Ruskeala to see the White Bridges Waterfall. This is a fantastic chance to snap a variety of intriguing photographs that will live on in your memories for the rest of your life. Then you'll travel to Kinerma, a Russian town that has been dubbed "Russia's most beautiful village." Continue on to Petrozavodsk. You'll spend the night in a hotel.
Day 4: Petrozavodsk - Medvezhyegorsk
Today you will travel to Medvezhyegorsk. After travelling down the ancient Murmansk route, you will arrive at the Marcial water resort. On the route, you will see the reserve and the Kivach waterfall, which is Karelia's first state reserve. It protects the republic's prehistoric flora and animals. After lunch, you will see the old volcano Girvas and the Palozerskaya hydroelectric power station panorama. You'll spend the night in a hotel.

Day 5: Medvezhyegorsk - Zaonezhie - Kizhi Island - Medvezhyegorsk
You will travel to Zaonezhie in the morning. You'll stop by the ancient chapel on the route. Arrival in the town of Kosmozero. It is a small old village situated on the southern shore of the lake of the same name, widening throughout the Zaonezhsky peninsula. The Church of St. Nicholas the Chudotvortsa will be seen (Khram Svyatitelya Nikolaya Chudotvortsa). Then you'll go to the charming island of Kizhi, which is famed all over the globe for its architectural ensemble of Russian timber architecture masterpieces. You will return to Medvezhyegorsk in the evening via the Shungite deposit. The night at the hotel.

Day 6: Medvezhyegorsk - Gimoly
You will go to the village of Gimoly today. This is an old town with historical structures. You will get the opportunity to rest on the lake's coast along an inaccessible route and snap wonderful moments along the way. Then you will travel to Lake Pizanets, which is known as the "Pearl of the Karelian Taiga" and draws a large number of tourists due to its uniqueness. You will arrive at the town of Gimoly. You'll spend the night in a hotel.

Day 7: Gimoly - Vegarus
You will go to the village of Vegarus after breakfast. This is a quiet and tranquil area of the Loimolsky rural settlement in the Republic of Karelia's Suoyarvsky region. You'll stop at the Votovaara mountain on the route. This is one of Karelia's most fascinating locations. This mountain is well-known for its many seids, which draw not only regular tourists, but also scientists from diverse fields. Then you'll go to Porosozero, where you'll have a short break. Arrival on the Vegarus. You'll spend the night in a hotel.

Day 8: Vegarus - Gardarika
Today you will visit the Gardarika protected area. This area is considered as one of Karelia's most environmentally favorable. Located 60 kilometers from Sortavala on the shores of the rare meteorite lake Yanisyarvi, surrounded by a stunning pine forest. You will stop along the road to see Mount Hiidenvuori from the Finnish Leshego Mountain. Arrival to the Gardarika hotel-club, where you will spend the night.

Day 9: Gardarika - St. Petersburg
In the morning we will tour to the city of St. Petersburg. On the route, you may stop by the Rock Garden Museum and the town of Puikkola, which is a 30-minute drive from the Gardarika hotel. The community is located in the Sortavala region's Kaalam settlement. There are about 500 individuals that reside there. Arrival in Saint Petersburg. You spend the night at a hotel.

Day 10: St. Petersburg - Peterhof - St. Petersburg
After breakfast, you will go to Peterhof, a suburb. This is one of the most stunning rural estates designed in the French Versailles style. The magnificent fountains in the Upper and Lower Parks, including the famed "Samson," will surprise you. The Great Peterhof Palace will also be seen. The exit to the Monplaisir Palace with an observation deck on the beach of the Gulf of Finland will be a special pleasure in the Lower Park. Then you'll return to St. Petersburg, where you may see the Cruiser "Aurora," a famed cruiser, as well as the Strelka V.O. cape on the eastern end of Vasilievsky Island. You will have the chance to see the Bronze Horseman monument, walk to St. Isaac's Cathedral and enjoy the fine-looking view of Gostiny Dvor (Guests' Court). Your night will be at the hotel.

Day 11: St. Petersburg - Airport
In the morning is transfer airport.