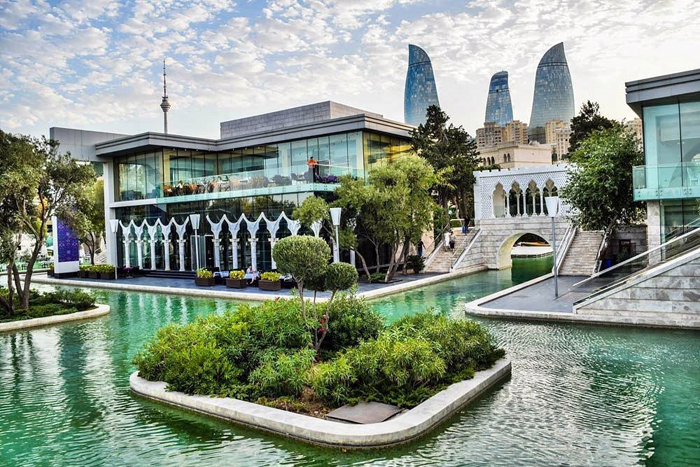 Day 1: Baku
The guide will meet you at the airport of Baku, a brilliant cultural metropolis on the Caspian Sea. When you get at the hotel, you will be able to get some rest. Following lunch, you will go on an excursion to the attractions of ancient and contemporary Baku, which will include a walking tour of the city's core district, which will highlight the city's most noteworthy historical and architectural monuments. The Heydar Aliyev Cultural Center, one of the world's most magnificent and contemporary structures in recent years, will be our next stop. It was designed by Zaha Hadid, a well-known architect. Visitors are encouraged to attend temporary, typically historical displays depicting Azerbaijani culture because of the building's distinctive lines and wonderful light play. Those who like modern architecture will undoubtedly remember this one-of-a-kind location for a long time. Around the center, you can observe the cityscape with the well-kept greenery of Aliyev's center, which is one of Baku's few distinctive and well-loved public spaces. The night will be spent at a hotel.

Day 2: Baku
You will be given a guided tour of the "Old Town" after breakfast at a hotel. Icheri Sheher is a historic residential neighbourhood enclosed by castle walls in Baku's core. The Market Square, Juma Mosque, Synyk Gala Castle, Caravanserais, baths, Maiden Tower of the XII century, residential structures, and the Palace of Shirvan Shakhov of the XV century are among the historical landmarks on the site of the ancient city. You will also pay a visit to Ali Shamsi's workshop. These, as well as hundreds of other historical sites in the Old Town, are recognized as UNESCO historical treasures and are managed by the organization. You will have some free time after lunch, then as darkness falls, you will go for a night walk around Baku. You'll stroll through the city's historic streets, taking in the starry sky and tens of thousands of lights. The night will be spent at a hotel.
Day 3: Baku - Gobustan - Baku
We'll go to the Bibi-Heybat complex in the morning, which includes the tombs and grave of Ukeima khanum, a descendant of the Prophet Muhammad, as well as the graves of other respected persons. Then we'll embark on a trip to the "Rock Carving Reserve of Gobustan." There are more than 6,000 rocks here that are more than 30,000 years old. We'll travel 10 kilometers off-road after Gobustan to reach the surface of Absheron's active volcanoes. We return to Baku after lunch and pay a visit to the world-famous Carpet Museum. The museum's collection comprises more than 10,000 items, including pottery, metal and bronze jewelry, 14th-century metal goods, 17th-century carpets and rugs, gold and silver jewelry, national dress and needlework, as well as modern-era applied art artifacts. The night will be spent at a hotel.
Day 4: Baku - Lankaran (Girkansky reserve) - Baku
Departure in the morning for a visit to the Hirkan Nature Reserve, which is on UNESCO's Representative List of Intangible Cultural Heritage. It's a spectacular natural complex of relict subtropical woods in a rare transition zone between wet and dry subtropics. Boxwood, ironwood, velvet maple, enormous figs, silk acacia, and a wide variety of vines may all be found here. On the reserve's land, 1900 kinds of diverse plants have been gathered, including 160 species that only grow in the Talysh mountains. In addition, there are many unique kinds of wildlife can be found here. The superb leopard, the Caucasian lynx, the stone marten, the porcupine, the Talysh spotted woodpecker, the Iranian robin, the Persian snake, and others should be highlighted among them. We will travel back to Baku after lunch at a scenic restaurant with a folklore and dance group Nyanyalar (Grandmothers) (for an additional fee). The night will be spent at a hotel.
Day 5: Baku - Shemakha - Gabala - Sheki
After breakfast, we depart Baku for Shamakha. In the town of Maraza, our first stop will be elegantly blended into the vertical wall of Sheikh Diri Baba's rock-cut tomb. The site's design incorporates an intriguing symbolism of geometric patterns, and the location itself has become a mythology, originating from spirituality. Then we'll travel to Shamakhi, a city with a rich history that has frequently hosted big events over its two thousand years of existence. There, we'll witness the majestic and historically significant Juma Mosque. Then it's off to Gabala, where you'll pay a visit to the Albanian church in Nij, where the Udins dwell. The Udins are progenitors of the contemporary Azerbaijani people and are one of the 26 Albanian tribes who founded the Albanian kingdom (III century BC - VII century AD). We go to the Aspi Winery for a wine tasting and lunch after getting to know Udinami. Transfer to Sheki and hotel accommodation. Dinner at a restaurant with Mugam music from the country. Mugam is one of the most popular types of traditional Azerbaijani music.
Day 6: Sheki - Baku
We begin our visit to Sheki in the morning. It is one of Azerbaijan's most picturesque cities, situated at 700 meters above sea level and surrounded by mountains and oak trees, like an old amphitheater. We'll go to the Shebeke workshop and learn how to make Sheki Halva there. Then we'll go to Kish, a lovely Caucasian village with stone houses and cobblestone streets that was once the capital of the local khanate. You will tour the Sheki Ipek Silk Mill after lunch. The kelagai (traditional women's headscarf made of silk), which is included in UNESCO's Representative List of Intangible Cultural Heritage, is the pride of not just Sheki, but all of Azerbaijan. Make your way to Baku. The night will be spent at a hotel.
Day 7: Baku - Absheron Peninsula - Baku
The Historical and Archaeological Museum in Gala is the first intriguing stop on our journey. The Bronze Age's earliest human habitation. On the site of an archaeological dig near the 5th century fortification, an open-air museum has been built. We'll visit the antiques museum after going through the village. Then you'll go to the Ateshgah Temple of Fire Worshipers, which is well-known. Crude oil keeps this perpetual flame burning. After lunch, you'll go on an amazing journey to Yanardag, also known as Burning Mountain. For thousands of years, the mountainside has been burning. You'll go to the local green market when you get in Baku. The night will be spent at a hotel.